Posted on: January 29th, 2014 by Mike Eugenio No Comments 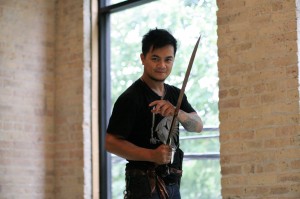 It is said that Filipinos hid their martial arts of sword fighting in their cultural dances when the practice of swordsmanship, and the carrying of swords in public was banned by the Spanish conquistadors. The traditional dances allowed the Filipinos to continue practicing their deadly art by training with sticks to replace the swords. It was a great way to mask the art and the Spanish people thought it was just for entertainment since Zarzuela was performed every year. Zarzuela was (and still is) basically a religious opera performed in public during the holy week of Lent. Since Filipinos were Christianized, this was no threat to the ruling body at the time.

I should point out that I have never read or found (to this day of my research) of any Spanish document banning the practice of martial arts or the public carry of swords. Even though imposing such a ban would make sense, the Spaniards actually favored the divide-and-conquer tactic by using the opposing ethnic groups as their soldiers. I would think the Spaniards would enforce martial arts training more or enforce it by sharing their own style of fencing to their new “hired” soldiers. In this case, the sword and dagger techniques of arnis de mano can trace its influence.

Banning of sword -carry and martial practice makes more sense to me in the Luzon island of the Philippines. Especially in Manila, which was established as the capital by the Spaniards during the time of the conquistador Miguel Lopez de Legaspi around 1500’s. Many foreigners have tried to claim Manila, including the Chinese, British, and even the Dutch, but the Spaniards were able to reclaim it back before the Americans came. With all these wars going on plus the Tagalog and neighboring ethnic groups’ resistance against the Spaniards, I can see the need of the Filipinos to preserve their deadly art in a form of dance.

Is this battle dance a myth? I have studied and researched different Filipino martial arts systems and most of my teachers agreed that the historical transmission of sword fighting art was passed down through the knowledge of “dances”, but nobody can show me what such a dance looked like. Maybe all these modern masters had a secret meeting and agreed to fabricate such a myth to hype the art. Some have pointed out to me to look at Fandango sa Ilaw, Maglalatik, Singkil, and Tinikling dances. I have…in fact I have done these dances in school performances as a child. I still don’t see the martial aspects. Has it been just lost through time?  Then I got lucky. Back in 2000 (13 years ago) I met and now study under Gat Puno Abon Baet. His family have been teaching and preserving the Moro-Moro battle dance for generations.

Let me say this…Moro-Moro is not a dance! By that I mean, Moro-Moro done outside of Zarzuela without the music, the stage, opera- recited poetry, and elaborate Roman costumes…it is essentially a kata or sets of fighting forms. In fact, It is a set of 30 attack-and-defend drills performed really fast as running attacks. It becomes dance-like when it is performed by a skilled player, because he or she can actually hide the movements by his “flow” of performance. Now add the stage, costumes, poetry, and music to the mix and you have a whole tradition that preserves: martial arts, culture, religion, and politics. 🙂

Click on the video to see some of my break downs of Moro-Moro “dance”.

Posted on: January 16th, 2014 by Mike Eugenio No Comments

Yes, there is such a thing! Although Filipino boxing may look similar to western boxing, especially in the early stages of studying it. I guarantee you it is quite different. Filipino boxing is not just limited to striking with hands. It utilizes everything from punches, kicks, elbows, knees, headbutt, take-downs, throws, trapping and joint locking. since there are so many elements involved in Filipino boxing also known in different dialects: as panuntukan (panoon’ tu-kahn), bakbakan, suntukan (soon’ tu-kahn), buntalan (boon’ ta-lan), etc.,,,etc. Mastery of proper body mechanics and balance in motion are the utmost important part of training. Here is my teacher Gat Puno Abon “Garimot” Baet demonstrating his devestating art of Sikadtukan. Sikad means to kick, and tukan derived from the word “suntukan” or “suntok” meaning to punch.

Watch the Roost*r get his butt kicked! Click here to play the video:

Posted on: January 16th, 2014 by Mike Eugenio No Comments

Why am I posting this? Most Filipino-Americans or Filipino expats do not know how to speak their native tongue. I find it interesting that most of them relate better in studying Filipino martial arts than learning the language or eating Filipino food to discover their roots.

Really funny when the girl asks if the guy video recording is Filipino. He replies “yes”, but reasoned that he came here when he was young…this girl was born here! Ahhh the power of Rosetta Stone.

Sarong Not Just for the Beach, but for Self Defense 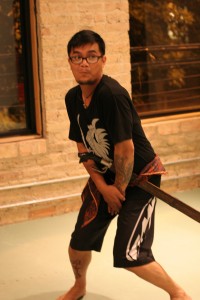 Sarong or flexible training in Filipino martial arts is one of the funnest part of the curriculum. Once you have reached a good understanding of your basic drills, concepts, and techniques in Filipino martial arts known as kali, arnis de mano, and eskrima, you can start training in the art of flexible weapon fighting. This subject can also fall into the improvised weapons category since the techniques you see here can also be done with a scarf, shoulder strap of your purse, a belt, a chain, handkerchief, or even a neck-tie. 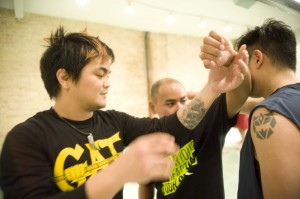 Here is the follow up to my Solo Door Training  blog.  Train smart, train safe, and have fun.

Click the link for the video:  Solo Door Training for Martial Arts

As a martial artist, we all know how difficult it can be to find a good training partner. Especially a partner that can be available 24/7, What does one do if a training partner is not available? The solution…a little imagination and innovation. One of my favorite training tool is a highly sophistacted piece of machinery called a door. It’s a great training tool that cooperates and has a true centerline reference feel to it.

Check out my video clip for some simple entry exercises. This is how I personally train all of the empty hand principles I have learned from kali, arnis, eskrima, wing chun, boxing, penjak silat, tai chi chuan, aikido, etc, etc…i have slowed down the drill for my students to see, and recognize some of the movements: entries, over riding, jamming, split energy, “peng” energy (fa jing and fa li), low line, linear, and circular patterns to occupy, and control oponent’s space. This is not the complete set, but just a small taste. 🙂