Posted on: February 16th, 2014 by Mike Eugenio No Comments 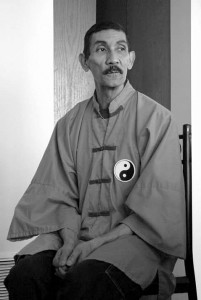 The Tai Chi learned by most people for health is usually a series of forms combined together to form a long, single, slow, meditative, continues movement. Some tai chi forms have a really long series of movements performed on the right and left side, others have 24, 48, up to over 100 movements. Some of the most popular styles are Yang Family, Chen, and Wu style tai chi chuan. Temple Style Tai Chi Chuan (which also comes from Yang style) has a long form or dance, but it does not rely on the long dance for true cultivation of chi (intrinsic enery). All styles of tai chi chuan aim to cultivate chi. The life force that is truly essential, powerful, and very elusive to cultivate if tai chi chuan is practiced incorrectly. There is a plethora of discussions on Chi or Qi (Ki in Japanese and prana in yoga practice) so I will not do it here. Google is your friend when it comes to this subject matter and you make your own intelligent conclusions regarding the theory of chi. In my experience of teaching, my students feel chi flow very early in their practice of just the first thirteen forms. This is without me telling them what to expect during the practice or even explaining the concept of this energy movement.

The long form has many useful qualities, but Temple Style does not rely on it for gathering chi. To cultivate chi in quantity Temple Style has a collection of stationary forms known as the First Thirteen. Like the long form, these forms are performed in a series, but each form is repeated multiple times before transitioning to the next form. I usually do five to seven repetitions of each form when I go through the First Thirteen exercise with beginner students. It usually takes anywhere from 30-45 minutes to finish the set. Like lifting weights, you add more repetitions to each forms when you think your mind and body can handle it. As you master the 13 collection of movements, more forms are introduced to be practiced. This is the time where a practitioner would set aside a separate practice for more single posture(s), after practicing the First Thirteen set.

These are the forms for Temple Style First Thirteen:

How to start practice for chi flow.

Simple but never easy. Remember to stay relaxed (alive not dead), focused (mindful), and breathe deep lengthy breaths. Let us start from Preparation Form. Working form the ground up, stand still with your feet hip-width apart. 70 percent of your weight should be on your heels. If you can wiggle your toes then your weight distribution is good. Bend your knees slightly according to your comfort. Tilt your tail bone forward causing the hips to scoop up. This will naturally cause your spine to lengthen as if you are trying to balance a stack of tea cups and saucers on your hips. Sink your chest in and let your arms hang loosely from your sides as if you are holding eggs under your armpits and you do not want to drop it on the floor or crush them in your arms. Feel your head floating like a balloon and your neck is the string. This is suspension. From your shoulders down let gravity take over and feel that heaviness like your body is just melting to the ground. Feel all your tensions flush downward. This is grounding. Have your eyes gaze into the horizon. Eyelids and your brow area feel heavy as if you are sleepy. Lightly connect the tip of your tongue to roof of the palette of your mouth just behind your teeth. This is the connection (internally). Now breathe expanding and contracting from your stomach. Focus on this area as you stand still for five minutes before Preparation.

My lineage of Temple Style Tai Chi Chuan comes from Master Jose P. and he learned it from Grand Master Waysun Liao (Oak Park, IL). There are others who practice this style around Chicago. Make sure you find a good and knowledgeable instructor if you are interested in learning tai chi chuan.

Here is a rare clip of my master doing push hands with me.

Posted on: February 12th, 2014 by Mike Eugenio No Comments 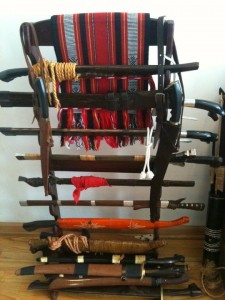 I’m sure a lot of martial artists are familiar with the Japanese way of the sword: Batto Jutsu, Kenjutsu, Kendo, Iaido, and Tameshigiri. I would like to talk about the Filipino way of the sword called Bunot Armas (or Sword Drawing). What’s that? You’ve never heard of it? Well me neither until I started practicing it back in 2006.

After training Iaido for some time, I started asking my instructors if a similar practice existed in Filipino martial arts. Most of them said no, citing the fact that most Filipino swords had “break-away” scabbard technology. Meaning two pieces of wood sandwiched the sword, unglued and only tied together by rattan fibers. Warriors of the old supposedly simply struck their opponents with the sword while in scabbard and the impact caused the sword to cut through the fiber twines cutting the opponent dead! It makes sense, since it is a well known fact that Filipino sandata (weapons) went through several scabbards during its service. I thought it was a good explanation and accepted it, even though I was left kind of disappointed. How can a highly sophisticated bladed art not have something like Iaido, which offered a higher level of internal focus for the mind and body…???

Garimot Arnis System filled that emptiness in me. One day, as I was picking up Guro Abon to do a private lesson in my garage; he asked me if I’ve ever seen Bunot Armas? I knew the literal meaning…but I ignorantly asked “what’s that?”

Well let me try to describe each Japanese sword disciplines so that we can better understand Bunot Armas. Let me start with the easiest one first.

Kendo is a fencing sport with two handed bamboo sword called “shinai” and it was originally developed as a safe method of training for samurais.

Tameshigiri, literally means “test cut”, is the practice and discipline of cutting with a “ken” (live blade) or a katana sword on a bamboo pole, tatami, or both…bamboo as the core, which represents the bone, and wet tatami to represent the human flesh. Fun stuff!

Kenjutsu (Art of the Sword) is a two person practice with prescribed attacks and defenses against a sword.

Iaido is the practice of drawing the sword, cutting with the sword and returning it back into the scabbard in one fluid motion.

Batto jutsu is a combination of Tameshigiri and Iaido. It requires drawing and then an actual cutting (Tameshigiri) of a target, and return the sword back to scabbard.

Bunot Armas is basically all of the above! 🙂

Bunot Armas is the traditional sword drawing techniques of Garimot Arnis de Mano of the Baet family in Laguna, northern part of the Philippines. It teaches you higher levels of combative situations, which demands great control, decisiveness, and precise actions. It requires, undaunted stillness of the mind to perform a task. A lot of us will find this practice highly effective in dealing with stress in our work place or in our lives. I have even taught some tactics directly from bunot armas to some of our local law enforcement when they needed simple effective weapons retention techniques. So far, I have learned two sets of Garimot Bunot Armas: Cinco Teros, and Siete Colores. I wouldn’t doubt it if there was bunot armas drills for Tres Puntos, and (Garimot) Doce Pares. Guro-Dad Abon Baet likes to keep things hidden until one is ready to learn the next cool thing.

Here is a preview of the basics. This is not the actual numbering of Cinco Teros Bunot Armas. It takes a lot of practice and a proper body mechanics to perform with a “live” (sharp) blade. Please, do not try this at home. The antique sword I am using is my personal favorite cutting sword.