It was a beautiful warm Friday. My girlfriend and I decided to visit and hang out with my son, her niece, and nephew. We asked them what they wanted to do. All three voted excitedly to go play at a park near by. On our way there, CJ and her sister confessed that there were a lot of bullies at this park, and that they have been bullied before. My girlfriend assured them that this will not happen today. 🙂

Sure enough, since it is still spring break there were kids out there. Age ranged from nine to their teens. One male teen with shaggy hair stood and stared at us as we walk pass them. He was groping his girlfriend, talking loudly, swearing, and started slap-boxing with his other buddies on the basketball court. I identified him as the “alpha male” of the crowd. The rest pretty much acted the same way following this guy’s lead. All just sitting around, being loud, and unproductive. I even saw a couple of the teen girls lied down in the middle of the street to wait for cars to pass. Definitely a stupid way to play chicken.

My kids decided to play tag. I, of course, acting with child-like wonder at the age of 40, put a little twist and invented the Zombie Tag game. At first, it was just four of us. Then one kid started to mingle in our game. He was climbing on things. You could tell he wanted to join in the action. I walked up to him, and asked him if he wanted to be a zombie. He immediately nodded his head with a tight smile on his face. His name is Bishop. Then another kid joined…then another, and another, and another, and so on until I introduced them all to my son, and my girlfriend’s niece and nephew. Needless to say we left the park with no bully incident and left the park with many new friends.

Walking back home, CJ and his younger sister, Sidney excitedly told us they already knew most of these kids, but this was the first time they talked and played with them. Now, how can you put a price on that and their smiling faces?

Message: Parents, teachers, or any adults who care, pay attention at how children (specially your own) treat each other. They all need guidance. Learn more about bullying, and hazing. Work together and help stop this youth issue. Bullying does kill. Make a difference and help prevent teen or preteen suicide.

Watch the clip of this event. I wish I captured more of this fantastic day when the crowd of kids was so much bigger, but I was too busy playing with them. I was only able to capture toward the end of the game as we were leaving the park.

Posted on: March 3rd, 2014 by Mike Eugenio No Comments 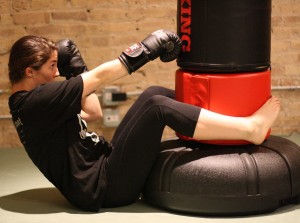 Physical altercations usually happen when you are standing up. Certainly, most martial arts prepare your training standing up and then maybe going down on the ground. It makes sense since most fights do start standing up and end up in grappling situations. But what about in a seated posture? After all it is very common and a very vulnerable position. Think about it. It can happen while you are sitting in a bus, train, restaurant, movie theater, etc. To me it is definitely worth the time to invest training in this scenario. The beauty in this type of scenario training is that you really do not have to change much of your stand up training or even your grappling training. The body structure is the same since the center of your gravity is already low. Think of it as if you are training your horse-stance, a wrestler assuming a leg or body tackle posture, or  a Brazilian jiu jitsu player already in his favorite element-on his back on the ground. In Filipino martial arts and some Southeast Asian cultures like the art of penjak silat, the seated position is not taken for granted. Aikido trains their techniques from kneeling position, some jiu-jitsu schools start grappling seated on the ground, some are seated on the ground and lean back to back from each other and fight from there. Think of the seated position as the “clinch”…it can be a transitional phase of physical combat to stand up and fight or fall to ground and finish your opponent. Just try training from this position. You will certainly not lose anything, but gain a broader perspective and understanding of your own martial art.

Here is a clip of my teacher, Gat Puno Abon “Garimot” Baet, teaching me the self-defense concepts from a seated position. I hope you enjoy it.