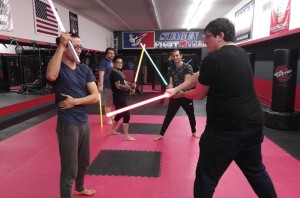 The Chicago Lightsaber Academy was born out of Tandang Garimot Martial Arts and Wellness, a school for Filipino Martial Arts in Chicago.  Our mutual background in Filipino Martial Arts brought us together, and our interest in Star Wars gave us a way of passing on our art in a fun, family friendly way.  In late 2015, we decided to put together a curriculum for teaching students to duel with lightsabers, which later blossomed into a school for bridging the gap between real life martial arts and the Star Wars universe.

Our team consists of several instructors and apprentices, led by Mike “Tandang” Eugenio.  Guro Mike has over 20 years of experience in Martial Arts, and has instructorships in several styles.   Guro Mike has adapted his martial arts curriculum for the unique attributes of the lightsaber, and uses commercially available “dueling” sabers to teach students in a fun, engaging environment.

One of Guro Mike’s senior students and fellow instructor, Guro James “Barakuda” Dolbeare, has worked with Guro Mike to craft lectures, presentations, and demonstrations on the crossover between real life martial arts and martial arts as they appear in the films.  Guro James is both an experienced actor and stage combatant and has taught at the college level.  Their combined experience makes for fun and engaging events for participants of all ages. 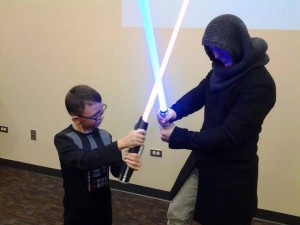 One might wonder what sets us apart from our competition.  In short, there is not much competition set us apart from.  As of this writing, no group in the Chicago area offers the unique combination of practical martial knowledge and stage combat experience that we bring to this topic.  More than that, the underlying martial art we teach is uniquely appropriate, both in the context of Hollywood fight choreography and theoretical lightsaber combat.

While the use of blades is not uncommon in martial arts, Filipino Martial Arts (Eskrima, Arnis, or Kali)  focus much more heavily on the use of weapons.  Filipino styles are featured heavily in recent Star Wars choreography, and the fight team from The Force Awakens is a group of martial artists from Indonesia whose practice is rooted in arts very similar to ours.  The reason for this is that, while many styles of eastern and western martial arts include swords of a length similar to a lightsaber, those styles typically evolved with a long, heavy metal blade.  Filipino styles, in contrast, often train student in the use of rattan sticks, which are lightweight and flourish easily.  Like a rattan stick, the blade of a lightsaber would weigh virtually nothing, and the weight would be mostly contained in the hilt and handle of the sword.